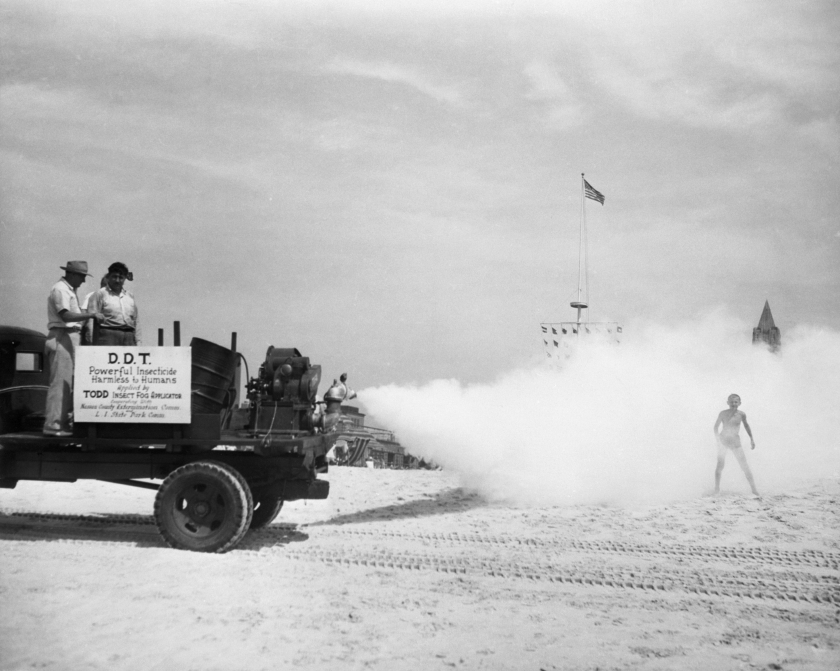 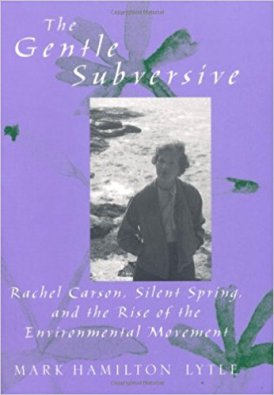 Since the 1960s, the global consensus has predominantly argued that the environment is in peril and is in dire need of protection from anthropogenic causes.  Who is responsible for ensuring the health and safety of nature when manufacturing chemicals to be used mainstream? At what point does the harm of a chemical outweigh the benefit? Marine biologist Rachel Carson (1907-1964) was a prolific writer in a genre that could easily be labeled “uplifting environmental science.” In her first book, Under the Sea Wind (1941), Carson describes marine life in an illustrative way that was understandable to the layman. However, when Carson begins to uncover the devastating statistics behind DDT, a synthetic organic compound used widely as a pesticide and Malaria preventive, her writing took on a much deeper meaning. Amid personal health issues, loss, and family hardships, Rachel Carson, a mild-mannered scientist with a penchant for writing uplifting books about nature, went head to head with major agricultural chemical companies resulting from her 1962 publication Silent Spring. Using the casual and illustrative tone her previous works were known for, Carson bypassed the U.S. government and reached out the public directly and subsequently inspire the modern day environmental movement.

In Mark Hamilton Lytle’s work, The Gentle Subversive, the circumstances surrounding Carson’s life are catalogued leading up to the publication of Silent Spring. This book is structured as a narrative and often reads like a novel. Lytle sources each of Carson’s book publications, several of her published journal articles, as well as newspaper articles and scientific reviews pertaining to Carson or her research. Each of the four chapters as well as the epilogue concludes with endnotes and occasional short anecdotes. The first half of the book describes Carson’s private life using references such as her personal diaries as well as interviews with her colleagues and friends. Illustrating Carson as a quiet, good-natured individual with a passion for the improving the environment, Lytle makes strong arguments for Carson’s continued perseverance when facing multiple obstacles. Prior to the publication of Silent Spring, Carson faced an onslaught of personal and academic challenges. Still dealing with the sudden loss of her parents, Carson’s sister also passes away and Carson was given full custody of her nephew, whom she would continue to raise alone (96). Additionally, Carson was diagnosed with breast cancer (10). While receiving treatment and raising a young child, Carson pursued her research on DDT and drafted a work that would kick-start the environmental movement as we know it today.

The second half of the book closely follows the paths taken by Carson in publishing Silent Spring. With constant obstacles associated with the prejudices faced in a male-driven scientific community, Carson overcame sexism in an era where “sexual harassment” was not a term and had no legal recourse (231). However, nothing was more paramount than the controversy Carson faced against the major agricultural chemical industries who manufactured DDT. In letter correspondences between Carson and Attorney Dorothy Freeman, Lytle illustrates Carson’s determination in appearing as an expert witness for plaintiffs effected by pesticide abuse (126). Lytle takes great effort to seamlessly juxtapose Carson’s personal accounts with the events in her career. Lytle argues that Carson formed a professional relationship that she may not have felt comfortable establishing with a male attorney; a relationship which ultimately resulted in the agricultural chemical companies being slapped with fines and heavy restrictions (149). Ultimately, Lytle portrays Carson’s life as challenging, as she wore the hats of an environmentalist, guardian, dedicated scientist, and fighter. Carson is described as a force of nature, not even letting a terminal disease stop her from finishing her work.

Included in his research, Lytle cites articles about John Muir, Henry David Thoreau, and other pro-environmental figures. Additionally, ecological data from the 1960s to 1990s and references popular environmental historians like William Cronon are included in Lytle’s work. By comparing synthetic pesticide use in the early to mid-20th century to Cronon’s theory of urbanization in colonial New England and the devastating ecological effects that resulted, Lytle argues that historians, “demonstrated that culture imposes ecological order on the land” (234). In other words, what is popular in mainstream society often effects the conditions of our physical environment, be it urbanization, flagrant pesticide use, or anthropogenic global warming from the burning of fossil fuels. Ultimately, Lytle’s intervention was less a scholarly work and more a triumph of the will success story. However, the publication of Silent Spring initiated a debate in environmentalism that is ever-present to this day. Lytle manages to provide new insight on a topic in which the public primarily favors science over industry. By reiterating the circumstances Carson overcame to finish her final work, Lytle reminds the reader that science can beat industry when it has the support of the mainstream. Whereas this book is not necessarily groundbreaking to the experienced environmental historian, Lytle’s work is deeply insightful in a field that is still in largely its infancy.