It’s truly astounding to see the shit being slung by some of the most powerful men on Earth toward a teenage girl. A girl who has a tendency to make the weak feel threatened. A feeling that has manifests in the form of anger, insults, and cruelty. But it has also trickled down into sheer nonsense and some claim that Greta is just a child exploited: a puppet of her rich environmentalist parents. That what she has to go through is a shame.

Just let her be a child, right?

Well, she’s not really a child anymore. She’s 17. She could be tried as an adult in most places.

And what I find so interesting is that these claims are coming from nothing but personal opinions.  A child found a passion for something and when she becomes overwhelmingly influential, surely she’s be being exploited? She’s not Nick Carter. This isn’t the Backstreet Boys, and the environment isn’t Lou Pearlman.

Is she being exploited?

The only one who can answer that question is Greta Thunberg.

And she has answered that question, usually with a laugh.

Let’s talk about exploitation as it is used in this context: to use (a situation or person) in an unfair or selfish way. Who is taking advantage of Greta? Is someone profiting off of her?

Let’s look at her parents. Were they environmentalists who force their beliefs on their child? Actually, no. According to the family, they ‘went green’ in attempt to support their child who was struggling with depression (Source).

And guess what helped her depression? Doing something she believed in. Something she was passionate about. Finding her calling.

And for those of us who are lucky enough to have found our calling, I’m sure you can understand this. It’s a drive that keeps you up at night and kicks you out of bed in the morning. For everyone else, don’t give up. You’ll know when you find it.

So why all the hate? 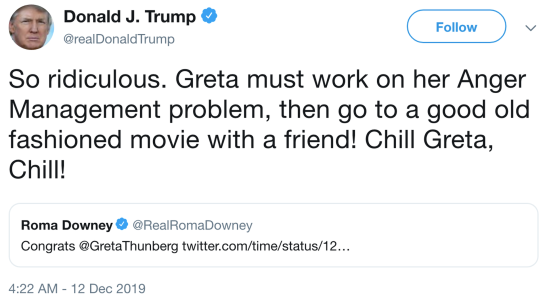 But she’s not the exploited teenager we should be concerned about.

In fact, most teenagers really do get exploited. Google “underage” and see what images pop up (NSFW). Why don’t we care about these girls who are actually getting exploited? Or victims of the Japanese Adult Video industry who are virtually sex slaves. Or, how about the sex slavery that exists within our own country?

To say Greta Thunberg is exploited is not only misinformed, it does a great disservice to those who actually are exploited.  There are articles upon articles demonizing this young adult’s parents, claiming that there’s no way someone her age would want to spend her time doing what she does (See: “Shocking new memoir reveals extent of Greta Thunberg’s suffering and exploitation”–  a conservative psuedo-news site that misleads the reader with personal statements taken out of context).

Despite the fact that Greta, with her own 17 year old words, has said otherwise. And quite convincingly at that.

Our throw away mentality is pervasive in every aspect of society. If we don’t see these sex slaves, they don’t exist, right? Here’s an experiment for you. Google late night massage parlors and read the Yelp reviews for them. I would bet you $10 that’s sex slavery ring.

These are the exploited women that we should be writing about.

Greta Thunberg’s father: ‘She is happy, but I worry’

Greta’s parents ‘went green’ to save their daughter