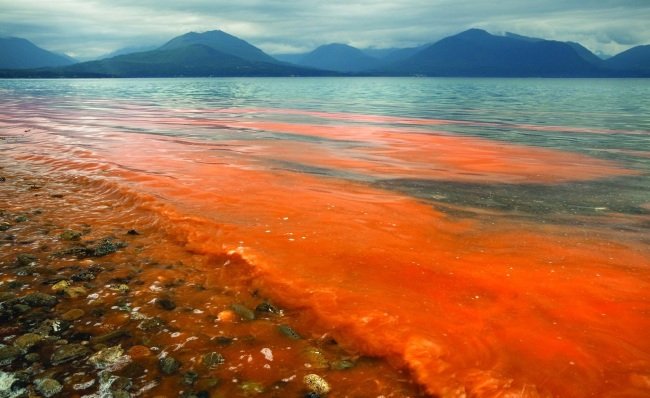 Red tide is a serious issue, and scientists attribute pollution as the main culprit behind the recent rise in these toxic algal blooms. On the Florida coastline, this is one of the worst red tide outbreaks in decades.

Florida has been especially affected by red tide, AKA Karenia brevis, which has infiltrated their coastline and spreads by wind and currents. With the oncoming hurricane approaching, this could spell disaster. Red tide is toxic to marine life and causes respiratory illness in humans. On the Florida coast, it has become an environmental and economic crisis.

According to The National Center for Biotechnology Information, “This dinoflagellate [Karenia brevis] produces a suite of polyether neurotoxins, called brevetoxins, that cause severe impacts to natural resources, as well as public health.” (Source)

Though red tide is naturally occuring, it has been exacerbated by human pollution. How? Well, like most algae, it thrives on nutrient-rich environments. The primary culprits are chemicals like nitrogen and phosphorous from agricultural runoff, like fertilizer. But sewage, vehicular and industrial emissions are also responsible.

Consider all the farms that border the Mississippi River, and the fertilizer runoff that drains down into the Gulf. Fertilizer is full of chemical nutrients like nitrogen, phosphorus and potassium, that wash away through erosion, rainfall, and flooding.

These chemicals act as food for algae, and when the chemicals accumulate in water, it becomes the perfect environment for algae to thrive. This is called eutrophication.

And with eutrophication, we see algal blooms. As algae thrive, they suck up all the oxygen in the surrounding water, and as a result, kill the marine life inhabiting the area. When the algae die, even more oxygen is required to decompose it.

Then we get dead zones. These are also called hypoxic areas, or areas with very low oxygen. There is a giant dead zone in the Gulf of Mexico over 8,776 square miles, and growing:

But this giant dead zone is not unique. Dead zones exist almost everywhere pollution dumps into bodies of water.

It’s also important to note that dead zones are not limited to oceans, this occurs in lakes and swamps,  too. And it’s not just red tide that’s toxic. In fact, green and blue algae can be harmful as well.

Landsat images captured in 2016 show algal blooms in Lake Okeechobee pop up during the summer:

It is interesting that the coastal areas that Lake Okeechobee’s runoff now pollutes (east and west of central Florida) are now the areas that have some of the most prevalent accumulation of red tide outbreaks. 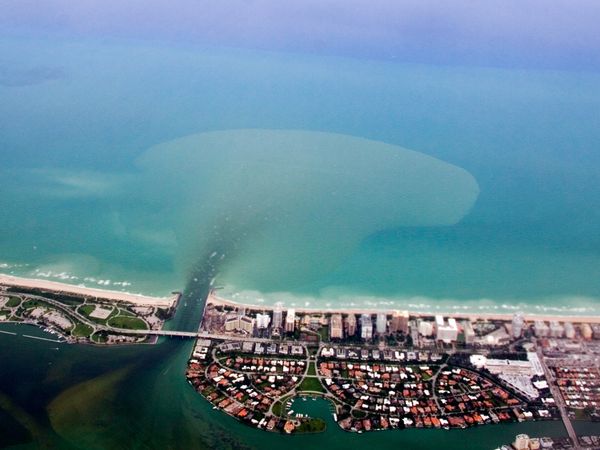 And although red tide does did not originate in the lake, as this particular algae can only survive in salt water, it does seem to love the phosphorus-rich drainage water from Lake Okeechobee.

This problem isn’t limited to the Gulf Coast:

Green algae like this is currently a huge problem as far north as Lake Michigan: 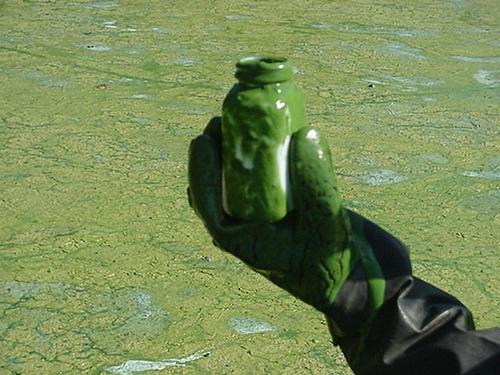 True to form, Karenia brevis (red tide) thrives off this nutrient-rich runoff, causing it to expand and spread with the ocean currents. This is a serious issue, and the only way to combat it isn’t as simple as “stop using plastic bags.” We can only combat it through education and honest news reporting.

I recently watched a Fox 13 Florida YouTube clip on red tide. The anchor who has a clear anti-environmental bias, downplays down the reality that pollution is the cause of this red tide epidemic Florida is facing. Unfortunately, many news agents are coached in downplaying global warming in Florida.

Did pollution cause red tide? No. Is pollution making red tide worse? Abso-freaking-lutely.

I mean, carbon dioxide is also naturally occurring…. So is methane… Just because something occurs in nature doesn’t mean we get to overwhelm the planet by overproducing it.

The point is, algal blooms can be catastrophic to ecosystems, causing nutrient imbalance and sometimes dead zones. Not to mention, some algae, like red tide, is toxic.

NOAA: Gulf of Mexico ‘dead zone’ is the largest ever measured

The Gulf of Mexico Dead Zone